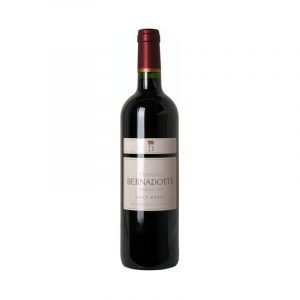 Bernadotte is a Haut-Médoc property located in the town of Saint Sauveur, at a place called Le Fournas. Its vineyard covers around forty hectares; it runs alongside the Pauillac appellation . In the tradition of the Médoc, Château Bernadotte mainly produces red wines . Heir to the best of wine culture and civilization, Château Bernadotte skilfully combines the contributions of modern technologies in the service of tradition. To keep or to keep, its good, well-made and sharing wines are appreciated all over the world.

A major challenge for the future, Bernadotte is committed to management that respects the environment through reasoned cultivation of the vineyard. There is no or very little use of chemical fertilizers, replaced by the contribution of natural organic matter. The techniques remain traditional and incorporate strict control of yields. The harvest, entirely manual until 2015, is now accompanied by the machine. The property has been certified by AFNOR AREA 2 since 2015 and HVE 3 since 2016. These labels of High Environmental Value attest that the reductions, or even the elimination of pollution are effective. The use of water is reasoned and recourse to energy saving is privileged. 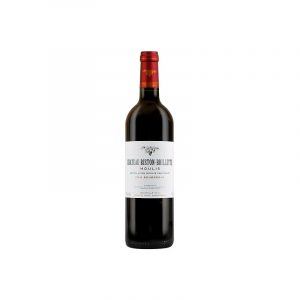 Ideal climate: long period of hot, dry and sunny weather, punctuated by some rains in August and early September to stimulate perfect maturity. The wines are remarkably well constructed! Deep color. Intense aromas of red fruits and spicy berries. Rich, delicate and tasty material. Beautiful constitution. The very present tannins line the palate, the palate is round, supple, silky and enveloped. Patience so that everything harmonizes. A very fine vintage. Keeps 12/15 years.

The Médoc in Moulis-en-Médoc, from vintage to Château, from passion to sharing, from history to terroir, Biston-Brillette blends into a route specific to the moulis of its rank. From its birth, Monsieur Biston, founder of Cru Biston-Brillette, made it one of the best Moulis Crus of his time. From now on, Michel Barbarin and his sons bring it all their know-how to give it the soul of a true Moulis with a fine and elegant character. Chateau Hauts De Plaisance 2017 is a blend of young vines of Merlot and old vines of Cabernet Sauvignon makes this Bordeaux quite rounded and approachable and ready to drink. The juvenile character of the young vines brings a fruit driven energy, whereas the older vines, grown in gravel add some structure and some ‘grippy’ tannins to the blend. 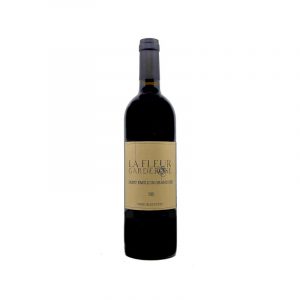 This wine is quite pure and fresh with little to no influence from the wood, there is an admirable purity to this vintage. It is young and well structured with brisk acidity and firm tannins. It will benifit from decanting or time in the bottle.

The Pueyo family works 7 hectares of vineyards distributed among severalparcels around Libourne. The average age of their vines is about 45 years. The grapes are manually harvested and the wine has undergone spontaneous malolactic fermentation and is unfined and unfiltered. The 2015 is a blend of 70% Merlot and 30% Cabernet sourced from their bestparcels. 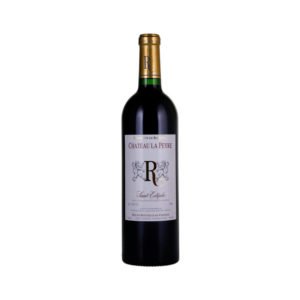 Château La Peyre Cru Artisan – Saint Estéphe
The wine is a blend of 50% Cabernet Sauvignon and 50% Merlot, the vines average age is 30 years old representing 6.80 ha producing a yield of 47 hl/ha on average. Once the grapes have been hand harvest and sorted at the cellar they are destemmed. The grains will undergo a pre-fermentation skin maceration at a cold temperature for a couple of days to extract colour, flavours and structure. The fermentations last 3 to 4 weeks in stainless steel vats at 23-28°C. The wine is aged in french oak barrels for 12 to 15 months of which 30% to 40% are new depending on the vintage.

PVins notes: Dark red in colour, expressive aromas with subtle hints of oak in its youth. On the palate the oak is well integrated, the firm tannins of a Saint Estéphe are tamed by the Merlot providing an elegant tannic structure and balance. The wine may be cellared for 15+ years depending on the vintage. 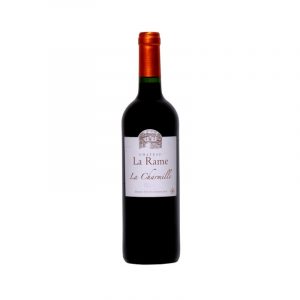 The wine’s blend is 60% Merlot and 40% Cabernet Sauvignon. The 5 ha of vines planted on clayey-limestone soils have an average age of 50 years old producing a yield of 45 hl/ha. The grapes are destemmed and the fermentations in stainless steel vats will last about 2-3 weeks at 25°C – 30°C. As for the ageing process, the two grape varieties are aged separately in french oak barrels for 12-14 months with 1/3 of new oak each year.

Expressive nose of black berries, cassis, plums, well integrated oak aromas fill the glass with hints of licorice and mocha. The tannins are elegant and fine grained, well structured and balanced, medium-bodied, a long fresh aromatic finish. It has a cellaring potential of 5 to 10 years depending on the vintage.

Château La Rame, “La Rame” meaning rock in old French, is located 40 kms to the south-east of the city Bordeaux in the Entre Deux Mers sub-region. It is situated on top of a hill on the left bank of the Garonne river overlooking Sauternes in the distance. The Château was the property of the Baron de Vertheuil during the French Revolution. In the late 19th century, the wine produced by Château La Rame was already considered to be the best dessert wine in the area winning a Gold Medal at the Universal Exhibition in Bordeaux in 1895 and also in Paris in 1900. In those days wine merchants of Bordeaux already regarded Château La Rame to be equivalent to a 1st Growth from Sauternes.

In 1956, Claude ARMAND acquired the 20 ha estate knowing the reputation of Château La Rame, as the family has a long history of working in the appellation’s vineyards from generation to generation. Claude started by improving the state of the vineyard and in 1969 with the help of his son Yves, they started restructuring the cellar to give back the Château its glorious reputation. Yves took over the running of the Château in 1980 and continued to strive for perfection. By passion and wanting to take the quality of the wine a step further, in 1983 Yves decided to create a special premium cuvée the “Réserve du Château”. Soon the French wine critics called it the local “Yquem” due to its excellent quality in reference to the famous Château d’Yquem from Sauternes, located on the opposite side of the Garonne river. It is of 1er Cru Classé quality as it often surpasses many Growth wines of Sauternes in blind tastings. In 1995 Robert Parker described the “Réserve du Château 1990” as a combination of Château Climens a 1st Growth of Barsac and Château Suiduiraut a 1st Growth of Sauternes. In 2000 a new cellar of 1,000m² was build to further improve the quality of the winemaking process and also increase the cellaring space. Since 2009 Château La Rame is managed by Yves’s children Grégoire and Angélique with her husband Olivier Allo, but Yves still has a watch-full eye on the estate.

Château La Rame also owns 8 ha of vineyards in the neighbouring appellation Cadillac, the parcels were purchased in the 1950s. The parcels with old vines are located on the plateau of Monprimblanc to the north of Sainte Croix du Mont. Under the name Château La Rame the family now also produce Bordeaux reds, whites, a rosé and a sweet Cadillac. The premium red “La Charmille” Cadillac Côtes de Bordeaux is named after the lieu-dit of the same name which derives from a type of tree planted on the estate called “charme” . 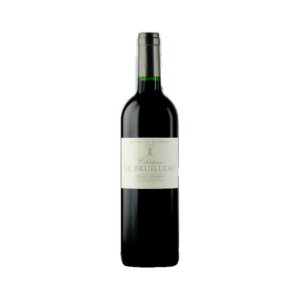 Château Le Bruilleau 2014 – Pessac-Léognan
The wine is a blend of 52% Merlot and 48% Cabernet Sauvignon averaging 25 to 30 years of age. Once the grapes have been hand-picked and sorted at the cellar they are destemmed. The grains will undergo a pre-fermentation skin maceration at a cold temperature for 4 to 5 days to extract extra colour, flavours and structure. The fermentations in stainless steel vats will last 3 weeks for the Merlot and 4 weeks for the Cabernet Sauvignon at 28°C. The Merlot and Cabernet are aged separately in french oak barrels for 12 months of which 25% are new, the two grape varieties will be blended at the end of the ageing period.

PVins notes: Dark red in colour, complex aromas of cedar with subtle hints of oak and ripe dark fruits. Well structured and balanced with fine grained tannins, round and fleshy on the palate, good persistence on the finish with the oak well integrated. The wine may be cellared for 10+ years depending on the vintage.

Press:  Bettane & Desseauve 14.5
Aromas of red fruits, nice oak, very fleshy with its tannic structure, long and balanced palate on the finish thanks to the freshness. A tense wine, full of elegance and character. This is an exceptional vintage of Les Grands Maréchaux. Strict vineyard management under the advice of consultant winemaker Stéphane Derenoncourt helps bring out this Merlot based wine’s rich mulberry, plum, cedar and incense character. Rounded, dark fruit and fig hints with a touch of chocolate Superb and affordable. 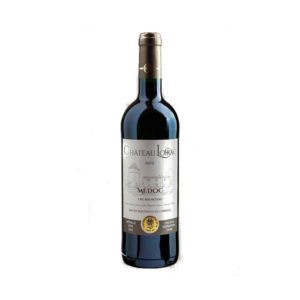 Chateau Loirac Medoc 2015 is round and warm, it enjoys a good support of the wood and ends with a long and sweet final. Balanced, Château Loirac has a well-defined personality.