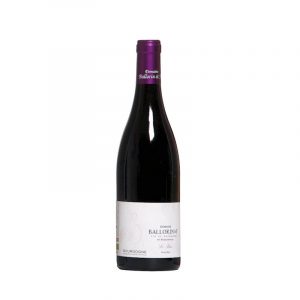 Gilles Ballorin and his wife Fabienne started out quite modestly in 2005 – with only 0.60 hectares of vines. After many years in the wine business working with other things they decided to go into production themselves, creating a domaine of their own. Today they have five hectares of vines, a giant winery in Morey-Saint-Denis and Bordeaux style labels on the bottles.

There are good and bad things about not having the heritage, not coming from a long line of winegrowers, says Gilles Ballorin. One thing is that I don’t have a name to rely on, so I really have to make sure I make good wine.

It was after having worked for the cooperative in Igé and Mercurey based négociant Antonin Rodet that he decided it was time for a change.

I had worked for other people for more than ten years and I was bored with it, he explains. Since I had been working for wine companies and since I like wine I thought about doing something in the same territory. Wine is a passion of mine, but I had to find out what I wanted to do. Wine merchant could have been one option, run a website on wine another. But I had some training in the vineyards and I enjoyed it very much, it was my environment.