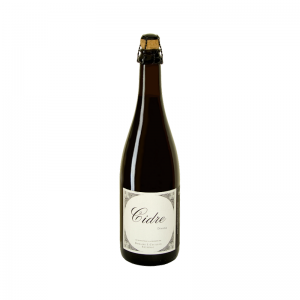 Divona is a Celtic goddess of the sacred springs.

Soils – rich, deep loam soil
This tart apple orchard is located at the bottom of the deep and loamy valley floor, surrounded by forest on one side a stream on the other.

Arboriculture – The tall trees are protected from the wind by grassy strips, which promotes diversity. There were no added pesticides or insecticides in order to protect the environment. We are committed to keeping in compliance with organic production.

Cidrification – The apples were manually harvested from October to November. The fruits were stored in bags under shelter for better ripeness. The fermentation is managed in tanks and then blended with natural yeasts in oak barrels.
The cider is bottled in late April, with natural bubble formation and no added sulfur, non-carbonated and non-pasteurized. A second fermentation occurs in the bottle. Wild yeasts are necessary to make the natural foam, it can make some turbidity.

Tasting suggestions – Ideal as an aperitif or to accompany wild berries.
Cool before serving at 8°C. 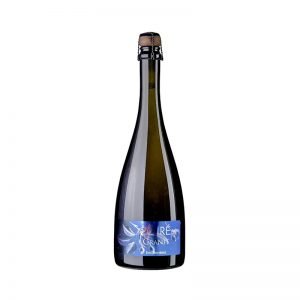 “Eric Bordelet produces some of the finest French ciders.. The most complex of his wines is his wonderful Poiré Granit. It exhibits an enthralling nose of pure, refined pear and spice aromas. On the palate, it has exceptional length, balance and definition. Light to medium-bodied, this pear cider has the depth, complexity and length of a top-flight wine.” Robert Parker

History
After a long apprenticeship with some of the greatest names in the restaurant business and the world of wine, former sommelier, Eric Bordelet, took over the family business in 1992.
The property consists of 23 hectares of certified organic cider apple, perry and corme orchards.

Our commitment
Organic cultivation, alongside bio-dynamic soil treatments are currently the best adapted methods in terms of the quality of fruit. Our orchards have been certified organic since 1996.

Geography
Situated in southern Normandy on the massif Armorican, extending from the Domfrontais to the edge of the Mayenne and the Orne.
The property is situated on the great brioverien schists, “Grand Crus” sedimentary rocks from the Precambrian era.

Geology
“Argelette” is an iron rich reddish rock, schist like and quite soft, formed during the primary era and around 3 million years old.
“Granit” was formed in the tertiary era, hard because it is young, the fusion of two elements makes up the complexity of the soil and the limono-clay sub-soil.

Sidermaking
Harvested by hand, into wire baskets and then placed into paloxs. Due to the large number of varieties, fruits are selected from September through to December according to ripeness.
To create the final balance, each variety of fruit is processed individually: it is assembled, coarsely ground, gently pressed and the juice is racked and settled.
Ancestral fermentation in vats and then bottling takes place over several weeks, even months depending on the vintage, with more or less residual natural sugars (fructose) so no need to add any sucrose.
Sulphite in different forms (mineral or solution) is added. A total of SO² of between 50mg/l et 80mg/l depending on the vintage. 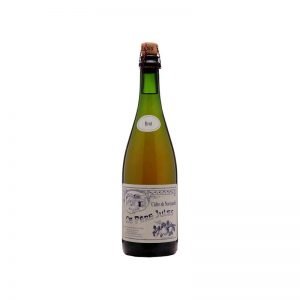 This cider is produced from no less than 20 different varieties of apples. This gives it a very nice balance between the sweet, bitter and acidic varieties. After a fermentation process that is modified in its length to produce the “brut”, “demi-sec” and “doux” varieties, and light filtration, it is bottled in order to naturally develop its own natural gas. This gives it the fine bubbles that we are known for.

Producer and proprietor-harvester of apple cider, Calvados, Pommeau de Normandie and pear cider since 1919, on 45 hectares planted with about sixty varieties in a traditional orchard of standard trees, with pays d’Auge Appellation d’Origine Contrôlée status. AOC. The ciders are 100% pure juice like all French ciders or Perry must be by law and no addition of anything but sulphite under strict conditions is permitted. This is very important to bear in mind when in most countries of the world ciders can have up to 45 % water added, with sugar, aromatics synthetic or natural, sugar, alcohol, preservatives etc. Absolute authenticity and tradition guarantee that besides the strict French cider regulation, Le Pere Jules, do not pasteurize, nor add sulphites to their ciders, meaning their quality is unmatched, but they are unpredictable, subject sometimes to secondary explosive fermentation, making champagne to look tame in comparison.