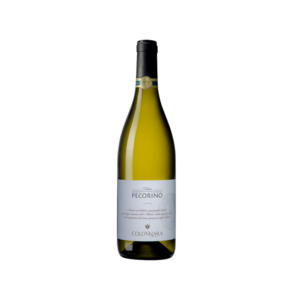 Pecorino belongs to the Trebbiano family and thrives best on cool high hills in the province of Ascoli Piceno, in the south of the Marche region.

The wine is straw yellow in color with green reflections. The pleasant nose is reminiscent of exotic and citrus fruit, flowers and herbs such as Basil. It has a very surprising taste in which freshness, pleasant acids and roundness go well together and the aftertaste is long and pleasant. Due to its freshness, this is an ideal aperitif,

Brilliant ruby red colour with garnet tints. The nose is sweet, predominantly fruity, with typical notes of morello cherry. Rich and pulpy in the mouth, flavourful and pleasantly harmonious, with silky tannins. The long finish is austere and intensely fruity.

San Lorenzo takes its name from the vineyard of the same name in the municipality of Osimo from which it originates. With its outstanding impact in terms of flavour and the enfolding warmth of its rounded tannins, it is a wine which is intended to express all the potential of the combination between its terroir and the Montepulciano varietal. These characteristics are augmented by the contribution from the oak lasks which are kept in the picturesque cave at Osimo, in which San Lorenzo is aged.

Umani Ronchi, Wine Producers in Marche and Abruzzo.
The Umani Ronchi story is one of ancient vines, land and people. Seasons waxing and waning. Harvests changing. Wines coming into being. The story began more than half a century ago at Cupramontana, in the heart of Verdicchio Classico country, and has spread further. Today Umani Ronchi is the wine estate owned by the Bianchi-Bernetti family, who since 1957 have been making superb-quality craft wines, coaxing the best out of the Verdicchio and Montepulciano that find their finest expression in Marche and Abruzzo.

Organic, a choice of quality
All our vineyards, from the Verdicchio to the Montepulciano, are farmed organically. For us, this was a technical decision rather than an ideological one. Organic farming requires balance in nature and a range of crops, trees and herbs that make up a biodiverse environment. The plants thrive on Umani Ronchi lands leaving space for a viticulture that gets the best out of the grapes we grow without compromising the quality of the wines. At Umani Ronchi, organic means quality.