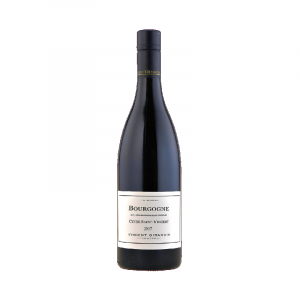 The history of Maison Vincent Girardin is relatively recent. In 1980, at the age of 19, Vincent Girardin, the son of a family of winegrowers based in Santenay since the 17th century, decided to strike out on his own, and began producing wine from two hectares of vines that he had inherited from his parents. Rich wine with generally notes of red fruits. Elegant nose with aromas of small red fruits (blackcurrant, raspberry, strawberry). On the palate, supple entry and silky tannins. Good power. From his earliest youth Vincent had a passion for working with vines, and great respect for the potential that they represent; his ambition was to produce his own wine. The quality of his wines was quickly recognized by connoisseurs all over the world, and this enabled him to expand his activity, focusing primarily on the great white and red wines of the Côte de Beaune.A collection of Burgundy wines by Vincent Girardin with the same standard of excellence To cope with the growing demand for his wines, he developed an approach that was new in Burgundy: he purchased grapes from producers who shared the same philosophy and the same high standards. In the years between 1980 and 1990 his passion and curiosity led him to try all of the techniques that were being employed at that time. It was only in the early 2000s with the arrival of Eric Germain as winemaker, that a profound change began to take place. They decided to concentrate on the essence of the wines: the expression of the great terroirs of Burgundy. A new purity of style was born, which has now been acknowledged by all winemakers. In 2012 Vincent Girardin sold his operation to a long-standing partner of the Maison. Mr. Nié, President of the Compagnie des Vins d’Autrefois in Beaune, naturally decided to continue with the small team of 9 people, who had been faithful to the Maison for many years. Eric Germain continues to uphold the style of the wines and Marco Caschera markets them all over the world. Maison Vincent Girardin offer prestigious appellations coming from 9 villages in the Côte de Beaune: Meursault, Puligny Montrachet, Chassagne Montrachet, Saint Aubin, Santenay, Savigny Les Beaune, Aloxe Corton, Volnay and Pommard. All of the Girardin Grands Vins are made from vines managed according to sustainable agriculture principles.