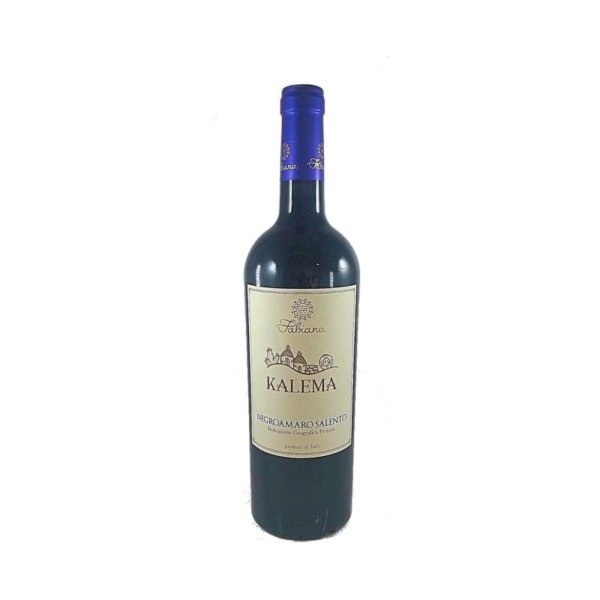 (seldom Negro amaro; meaning “black [and] bitter”) is a red wine grape variety native to southern Italy. It is grown almost exclusively in Apulia and particularly in Salento, the peninsula which can be visualised as the “heel” of Italy. The grape can produce wines very deep in color. Wines made from Negroamaro tend to be very rustic in character, combining perfume with an earthy bitterness. The grape produces some of the best red wines of Apulia, particularly when blended with the highly scented Malvasia Nera, as in the case of Salice Salentino.

While negro is from an Italian and Latin word meaning “black”, there is some dispute as to whether amaro is from the Italian word for “bitter” or whether it derives from the ancient Greek mavro also meaning “black”.[1][2] If the latter theory is correct, mavro may share a root with merum, a wine brought to Apulia by Illyrian colonists before the Greeks arrived in the 7th century BC. Horace and other Roman writers mention mera tarantina from Taranto, and Pliny the Elder describes Manduria as viticulosa (full of vineyards). But after the fall of the Roman Empire winemaking declined until it was only kept alive in the monasteries – Benedictine on Murgia and Greek Orthodox in Salento. Negroamaro could be the grape used in merum, or it could have been brought by traders from the home of wine-making in Asia Minor at any point in the last 8,000 years.

Negroamaro precoce has recently been identified as a distinct clone.

RAPD analysis suggests that the cultivar is loosely related to Verdicchio (Verdeca) and Sangiovese.[3]

The Cabernet Sauvignon showcases a single varietal blend from our premium vineyards situated at Thomas Block and Jones Block and highlights our Biodynamic and Organic vineyard practices. Each vintage, our winemaker hand selects and blends the top blocks to create this very popular Cab Sauv offering.

This wine is showing beautiful varietal expression, with soft tannins, and is ready to drink now, however careful cellaring of 10 – 15 years will be rewarded.

Paxton are leaders in both organic and biodynamic viticulture and winemaking. Fruit for all wines are sourced solely from estate vineyards in McLaren Vale, South Australia.

Established in 1979, Paxton is a family owned wine company. Founder and owner, David Paxton is one of Australia’s most highly respected viticulturalists – a reputation built on managing and growing wine grapes of exceptional quality for over 30 years.

The Paxton family have nurtured their own vineyards in McLaren Vale for three decades. Internationally recognised as one of Australia’s leading wine regions, McLaren Vale is renowned for the production of super premium quality wines – particularly red wines.

In 2000 the family released their first wine under the PAXTON label: the 1998 Paxton Shiraz. Today, under the direction and guidance of winemaker Richard Freebairn Paxton produces a range of estate grown wines under the family label.

The Paxton wine range is an approachable collection of wines that showcase McLaren Vale’s fruit quality (through Paxton’s superior vineyard sites), natural diversity and varietal expression. In the winery, minimal winemaking intervention ensures the integrity of the fruit from vineyard to bottle.

Paxton vineyards are spread across a diverse number of sites and soil types, which are managed without compromise from planting to harvest. David Paxton continues to strive to minimise inputs and manages the Paxton vineyards biodynamically – a system of farming without the use of synthetic fertilisers and pesticides with a focus on promoting healthy, living soils through the use of natural compost preparation.