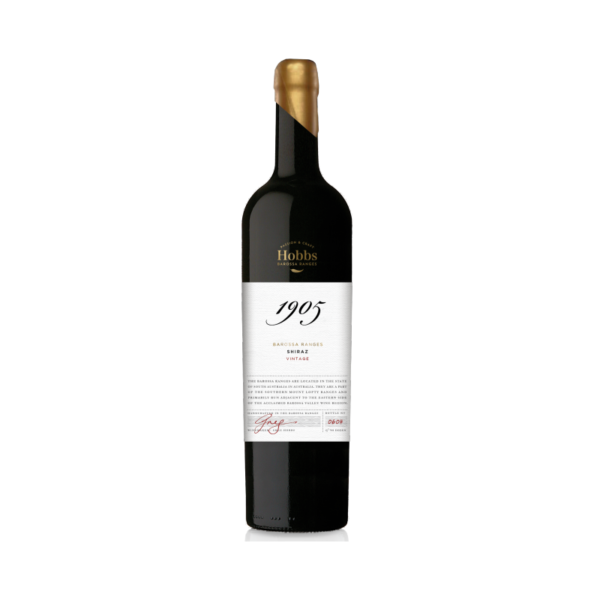 Elegance and power combined beautifully ion this wine. Produced from a single vineyard planted in 1905, this Barossa Shiraz is extravagant. Poise, silken, direct and exaggerated flavours. Only 260 dozen bottles produced.

At Hobbs we lavish care and craft on the grapes that we grow to make exceptional wines. Yet as much as considered winemaking counts towards the quality of our final products, soil and climate play a vital part in defining the character of each vintage even before the grapes are picked.

The Barossa Ranges provide unique conditions for grape growing. The Hobbs vineyard is situated at the top of the ranges, overlooking Flaxman’s Valley.

The coarse, yellow, podzolic soil here lies atop clay subsoil, mixed with decomposing rock. It may not sound very exciting, but it has a great advantage for us – this strata stores water well, meaning our vines can be effectively dry grown.

A combination of wet, chilly winters and warm summers conspire with the unique local soils to produce grapes of rich character. Growing season temperatures in the Hobbs vineyard are comparatively low. The influence of these lower temperatures is significant, creating a longer ripening phase that results in very distinctive varietal flavour characteristics.

The Barossa Ranges are rugged and beautiful. Like most of nature’s gifts, their beauty is more than skin deep, the secrets of soil and seasons bringing so much to the wines we make. Some of our vines have thrived for a century in this idyllic hillside setting, their grapes only becoming richer and more distinctive as the decades roll by. To taste any Hobbs wine is to savour the very essence of where we live.

The story of Hobbs began in 1995 when Greg and Allison’s next-door neighbour, and outstanding winemaker Chris Ringland, made their first few vintages. The Hobbs’ and Chris have enjoyed many a long and animated discussion, in the vineyard, and over meals paired with a glass of wine or two, as they blended thoughts and ideas that have formed the individual style of their wines.

Since then, Chris has directed them on the right path by guiding them in making their own wine, while joining them as a consultant and friend.

Hobbs of Barossa is similarly fortunate to work with Pete Schell (Spinifex Wines) who has been a winemaker with them for the past 10 years. He now focuses on the Gregor, the Tin Lids range and the Fortified Grenache. Pete has a sensational palate and nose as well as superb winemaking skills. He believes in the quality and influence of fruit and has an inordinate integrity and honesty that is revealed in his winemaking style.

With a strong belief in their own fruit, the team’s combined skills and their desire to make only wines of exceptional quality, Hobbs are becoming one of Australia’s premium labels.